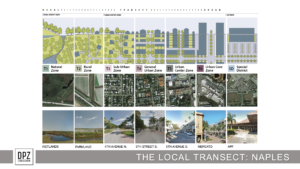 During an interactive presentation, Galina Tachieva highlighted the opportunities for creating better and healthier communities in Collier County using form-based planning and coding.

Collier County is a fast-growing region but the current Land Development Code is complicated and outdated. If done right, new planning strategies can be effective in creating dynamic, walkable communities. These area-specific Form Codes will benefit residents, economics and the environment. It is however important to assist developers and planners understand the importance of smart growth principles. Galina Tachieva, managing partner at DPZ CoDESIGN, and author of the Sprawl Repair Manual and the Smart Code shared her guidance and expertise on these topics.

As the scale of testing increases, the potential of driverless cars to transform our lives is becoming clearer. Fewer parking spaces, reduced road space, deliveries on demand, demise of strip malls, longer commuting distances, and a need for flexible parking structures, among others, have major implications for our urban and suburban development patterns – not all are necessarily positive.

More than 60 percent of all development took place on farmland between 1992 and 2012 (American Farmland Trust). Of this, 11 million acres was land most suitable for intensive food and crop production. Sprawl is a recognized contributor and some Counties are responding with programs to conserve these strategic assets.

“Providence, which won a 2018 CNU Charter Award, is an example of how traditional neighborhood development can add to quality of life in a car-oriented suburban landscape.” explains Rob Steuteville, Public Square. The 305 acre Village of Providence intentionally rebalances the previously fragmented, single-use sprawl at the northwest city limits of Huntsville with infill, housing diversity, shared amenities, and useful commercial. By providing the region’s missing ingredients in a walkable environment, it has become a preferred place to live and a popular evening hang-out.

Millennials seek the live-work-play lifestyle, but evidence suggests they are no longer solely focused on compact, diverse urban centers. In an attempt to attract this valuable demographic “suburban villages” are being created in larger developments. Lakewood Ranch is sighted as an example, with its Main Street cluster of condos, shops, restaurants, theaters and employers nearby. The investment appears to be working as millennials are buying homes in large numbers, and their preference shifting towards mature and emerging suburbs.

A new technique called a pattern zone can be used by cities and towns to make good urbanism a natural outcome of their local real estate market. The concept itself isn’t necessarily new as Matthew Petty, a planner and developer in Fayetteville, AR, discusses.

Before zoning codes and land use lawyers, cities were built from pattern books containing construction plans for the building types in common use.  However, a municipal pattern book with pre-approved plans is at the center of the latest pattern zone concept. It changes the market activity because it lowers those barriers in ways that are valuable to developers: time and money. Matthew explains “For a missing-middle project, the savings can equal thousands of dollars per unit, once again making middle-scaled buildings as economical as single-family subdivisions and large-scale developments.”

These fascinating maps challenge our perception of sprawling America – the urbanized area seems compact in comparison to all other uses, 3.6 percent of the total. However, the urban area is growing at an average rate of about 1 million acres a year and sprawl is still winning the numbers game.

Contrary to the current Retail Meltdown from excessive retail outlets and online competition, the dollar store model – simplified offerings to meet basic needs, no-frills buildings or service, and continued investment in markets that show good returns – appears to be attractive to low- and high-income shoppers, as well as to investors. They fill a need, especially in more rural markets.

By the end of the year, more than three in four Americans will live within 5 miles of a Dollar General, the company noted on the call.

Dollar General has succeeded thanks to its lean business model, said GlobalData Retail analyst Neil Saunders. Its smaller stores sell cheap day-to-day essentials, especially in rural areas where it doesn’t make sense for Walmart or other large retailers to open up shop.

“The company [is] the closest and most convenient general merchant for millions,” said Saunders.

Sales were up 4.3% last quarter at stores that were open a year ago, a sign of retail health. Revenue last quarter ballooned to $5.9 billion — an 11% uptick from last year — in part from hurricane-related spending in Texas and Florida.

But lower-income Americans remain the store’s primary customers. The stores attracted shoppers during the economic downturn in 2008 and 2009, and consumers haven’t stopped coming back since, even as the economy has picked up steam.

“Flame and Fortune in the American West,” a book by University of Colorado Denver professor Gregory Simon argues that increasing devastation by fire is a result of building homes and businesses in unwise places, rather than the easy scapegoat of ‘climate change’. An interview with the author discusses economics and development patterns that increase fire risk at the urban boundary:

“One objective of the book is to say, look, you can change land use planning in this way or that way, you can change the rules, you can change development to reduce fire risks and costs. But the other part of the book is concerned with how we talk about fire. I argue that when we suggest the problem is caused mainly by climate change and environmental factors we are actually exonerating — unfairly — the role of humans and city developers in creating these risks in the first place …  We keep spreading cities farther and farther out and I think that needs to be part of the discourse. Fires disasters aren’t natural, they’re very social.

I propose ways in which we can slow down this process of converting landscape, and adding risk to the landscapes and extracting profits from landscapes, by doing things like taking land out of availability through conservation easements or making development more costly, whether that means reducing fire protection services or reducing home ownership incentives.” 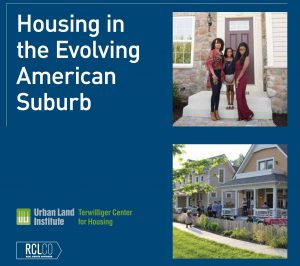 A December 5, 2016 report, Housing in the Evolving American Suburb, provides a new analytic framework developed by RCLCO for the ULI Terwilliger Center for Housing that describes different kinds of suburbs based on the key factors that define and determine their housing markets. The report classifies and compares suburbs in the 50 largest metro areas in the U.S. – shown in a searchable online map – and assesses the key issues that will shape suburban residential demand and development in the years ahead.

Terwilliger Center Executive Director Stockton Williams says, “The capacity of American suburbs to evolve with the economic and demographic transformations the country is experiencing will be one of the central real estate and land use issues of the 21st century.”

The Sprawl Repair Manual presents a comprehensive methodology for transforming sprawl developments into human-scale, sustainable communities. In this richly illustrated book, Galina Tachieva draws on more than two decades of experience to provide a step-by-step process of design, regulatory, and implementation techniques for reurbanizing and rebalancing suburbia.
Her solutions will inspire and equip anyone looking to reimagine suburban development.

The Sprawl Repair Manual is so far the only complete physical planning manual for handling the impending transformation of suburbia into vital human communities. It is not only hugely instructive but formidably inspirational.

—Leon Krier, Master Planner of Prince Charles’ Poundbury Project in Dorset, UK and author of The Architecture of Community