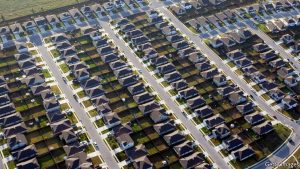 “The last time Americans fled the cities for the suburbs, from the 1950s to the 1980s, they were driven primarily by fear of crime. This time the migration is the consequence of the cities’ success, not their failure. Housing
and rental prices in many of the country’s largest metro areas have soared, inspiring residents to pack up and move out.

As more young people decamp from the cities to the suburbs, … a hybrid might develop, where people who leave cities—especially the most vibrant and expensive ones—will gravitate to places with similar amenities. Or transform them—as is happening in San Marcos. Though it has its fair share of cookie-cutter homes and strip malls, its well-preserved old downtown boasts a brewery and beer garden, a yoga studio and, now, a bootcamp boutique.”